Excerpt from In the Thick of Things: Brief Musings on
Living in an Animate World (World Soul Books, 2013) 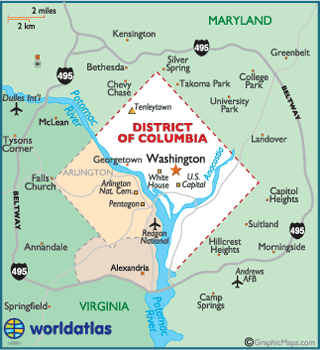 Terrapsychology studies how terrain, ecology, and place show up in human psychology, aspiration, and endeavor. It begins with the premise that we are not really separate from the sites where we live and work. Understanding what we do and who we are requires understanding where we live.

1790. It was official: the capital of the United States would move from Philadelphia, “City of Brotherly Love,” to a site along the Potomac River near where it entered Chesapeake Bay. Alexander Hamilton had cut a deal with the South. In exchange for their assumption of a portion of Northern debt, the capital would be built in their territory.

From the air or on maps, that stretch of the Potomac resembles a birth canal with virginally named Maryland and Virginia waiting patiently on either side. “Potomac” started as an Algonquian name for “Place Where Tribute Is Brought.” Like eager midwives, surrounding states volunteered to contribute land to welcome this new birth.

The District of Columbia partition idea floated when unpaid soldiers rose up to demand their long-delayed pay. This event convinced the nation’s founders that its fragile new headquarters could not depend on any particular state to protect it: to be born it needed one all its own. George Washington had grown up in the Potomac watershed and, stepping forward like a dutiful father, selected the site of the Capitol on the river’s northern bank.

French architect Pierre Charles L’Enfant laid out the city diagonally in a L’Enfant (“The Infant”) Plan around and above the birth canal, with the city sitting where in a woman’s body the fallopian tubes branch like tributaries reaching outward from the uterus. A later height restriction would keep new buildings from growing up too tall.

During the War of 1812, British forces burned most of the Capitol and its attendant buildings to the ground, but, having risen slowly and incompletely, they were still unfinished when the attackers arrived. African labor quickly restored them.

An act signed by President Lincoln in 1862 ended slavery in the District: no more involuntary midwives. The Emancipation Proclamation passed three months later. In 1975, Walter Washington became the District’s first black mayor. By then the diamond-shaped District had lost its west corner when Virginia received back the territory it had granted so that landowners in Alexandria County could keep their slaves. They lost them anyway at the end of the Civil War, but the diamond had been mutilated.

Today the Washington Metropolitan Area bursts with the seventh-largest urban and suburban in population in the U.S. Within it stretches a city of monuments, traffic jams (second worst in the nation), government centers, and slums. Only a third of the population can read. 82% of that population is religious, with the largest group, Baptists, comprising 28% of the city’s. Crime, especially robbery, is rampant in the east sector of the city. Most who commit it are poor, but the motto of the District is Justitia Omnibus: “Justice for All.” District residents have sought statehood for decades but never achieved it. Around the swelling waist of Washington circles Interstate 495, otherwise known as the Beltway.

Residents who never fully become so. Residents who cannot read. Buildings that never fully rise. A territorially sliced-up lower abdomen. A Beltway around the waist. A Capitol built by slave labor to house political les enfants terribles who never outgrow their flagrant narcissism. Unpleasantly humid summers; monuments to dead father figures, including the father of the nation. The intercity canals L’Enfant wanted built were slow to open, but they did. Perhaps we should call it Wombington.

Narcissism (“self-love”) comes in two varieties: primary and secondary. Primary narcissism is that of the young child in whom self-absorption and a magical feeling of godlike omnipotence are developmentally appropriate: “Look at me, Mom and Dad! Look at me!” They need parental mirroring of their specialness, and parental containment too when abrupt collisions with their limitations send them into fits of screaming frustration. Secure attachments and predictable limits allow children to outgrow their narcissism and discover a world where other people, places, and things have their own needs worthy of attention and respect.

If all does not go well, however, these children remain in the bubble of self-preoccupation: the secondary narcissism of the adult who never grew up emotionally. The ducking and dodging, cheating and lying politician interested only in his own agenda, glamor, and glory exhibits the characteristic symptoms. He will fight over definitions of abortion, marriage, and chastity as the world overheats. From within the snug Beltway bubble his embryonic awareness takes no notice. More mature politicians are forced to act as his parents. Many burn out and go home.

The Potomac is polluted with heavy metal toxins, runoff, and pesticides that allow alien species to invade. How could an adult consciousness, let alone that of a nation, ever move down the canal of a polluted womb? History books written by self-styled patriots applaud the birth and growth of the United States, but in truth we have yet to be fully born as a conscious, responsible people, and the geographically intrauterine site of our Capitol confirms that.